The eighty page guide to Coastal Risk Management was written by Professor Robin McInnes OBE, Chairman of SCOPAC’s Technical Officer Group 1995-2009, and updates an earlier version by the same author, first published in 2004.

The guide was launched to an invited audience of coastal MPs and coastal professionals by Cllr Roger Elkins from Arun District Council, current Chairman of SCOPAC, Andrew Turner MP and Robin McInnes. 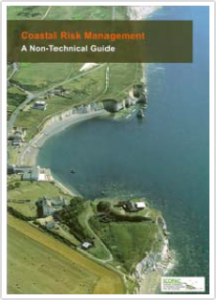 The coastline of Great Britain has been progressively developed in recent centuries. Coastal zones not only make a very significant contribution to the economic well-being of the country but also provide opportunities for relaxation, recreation and enjoyment within a diverse range of outstanding natural environments. Over the last ten years considerable efforts have been made to encourage improved coastal management and this has led to the development of national strategies for the coast in support of the principle of sustainable development. As part of this process thorough consideration must be given to natural hazards, and the resulting risks to people, property and the environment. Risk management strategies for vulnerable areas provide a framework for addressing hazards arising on the coastline from marine erosion, flooding and land sliding.

Climate change is with us now and is going to exert an increasing influence on the lives of coastal and inland residents over the next decades by affecting the severity of coastal erosion, flooding and landslide events. Many climate impacts, particularly the most damaging ones, are likely to be associated with an increased frequency or intensity of extreme events. This is an important area for further research since many studies do not explicitly take into account the effects of extreme conditions, although it is known that such events pose significant risks. Climate change is imposing increasing pressures on certain coastal locations, and, as a result, is necessitating changes in our approach to the management of risks. It is recognised that it is impossible and, indeed, undesirable to defend all parts of our coastline and the development of risk management strategies to help ensure wise coastal decision-making must be based upon a thorough understanding of coastal evolution and natural processes. Recently an initiative by the government (Defra) has led to a restructuring of responsibilities for addressing coastal risks.

For the first time one national organisation has overall responsibility for both flood defence and coast protection. With its ‘Strategic overview for coastal risk management’ the Environment Agency, and local authorities who have held long-standing powers to carry out coast protection works, will be working together more effectively in accordance with national standards and guidance, to meet the challenges arising from climate change, looking ahead for the next one hundred years.

Over 20% of the European coastline faces serious problems resulting from coastal erosion with thousands of kilometres affected by significant retreat. The present and future challenges involve management of increasing levels of coastal risk, whilst at the same time seeking to maximise opportunities for preserving and, where possible, enhancing our coastal environments. It is vital to avoid past mistakes which have, in some cases, increased risks or caused environmental damage.

The Standing Conference on Problems Associated with the Coastline (SCOPAC) is an influential network of local authorities and other key organisations with an interest in coastal risk management. Established in 1986 SCOPAC’s role has been to assist local authorities and others along the south coast of England in developing a more co-ordinated approach in this field, and, by commissioning research and sharing information, ensuring that a sustainable approach is developed to coastal risk management. SCOPAC was concerned that although significant advances had been made in recent years, which were appreciated by those directly involved and within related professions, this level of understanding had not been effectively disseminated to non-technical decision-makers and other interest groups, who are required to make decisions about the coast on a day-to-day basis. Such stakeholders include politicians, businesses – both commercial and tourism-orientated, and local residents. Issues such as the predicted impacts of climate change including sea level rise, important environmental legislation and a better knowledge of coastal systems had not been explained in a non-technical manner. There was, therefore, a divide between the knowledge and expertise of the professionals, and that of others who wished to learn more about risk management in the coastal zone. The first edition of this guide was published in 2004 in order to explain current thinking in relation to coastal defence in an informative way using illustrated examples of current approaches to addressing coastal problems. The guide was welcomed by coastal stakeholders, but since then significant advances and policy changes have been made in terms of assessing and managing coastal risks. As a result, SCOPAC decided to publish an updated edition of its ‘Non-technical guide’.

The development of a sustainable approach to coastal risk management can only be achieved through consensus between all the organisations and interests involved, including the general public. Such a participatory approach can be achieved most effectively if key issues are explained clearly in a non-technical language; this is the challenge that this latest SCOPAC guide seeks to address.

The risks posed by coastal erosion and flooding by the sea are becoming increasingly recognised by the public. Historically some developments have taken place in vulnerable coastal locations and this has increased the risks to both commercial development and residential properties. If no flood or coastal defences were in place across England and Wales the annual average economic damage could amount to billions of pounds a year; this figure will escalate as a result of the impacts of climate change. This new guide explains the significant advances that have been made in recent years in terms of improving both the policy framework and the structural arrangements for delivery of sustainable coastal risk management. It is hoped that our new guide will provide an interesting and informative reference source for all those involved in the management of natural risks within the coastal zone. 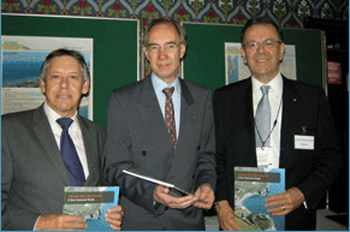