The pebbles were collected from the study area, drilled and a tag inserted, before being measured and deployed back onto the beach. Each tracer pebble has a unique identification number, and can be detected up to a metre deep within the beach without the need to dig up the pebble. The tags do not rely on battery power and should work for 50 years.

See Tracer Pebble Studies for further details of  the technique used, and of other studies in the region. 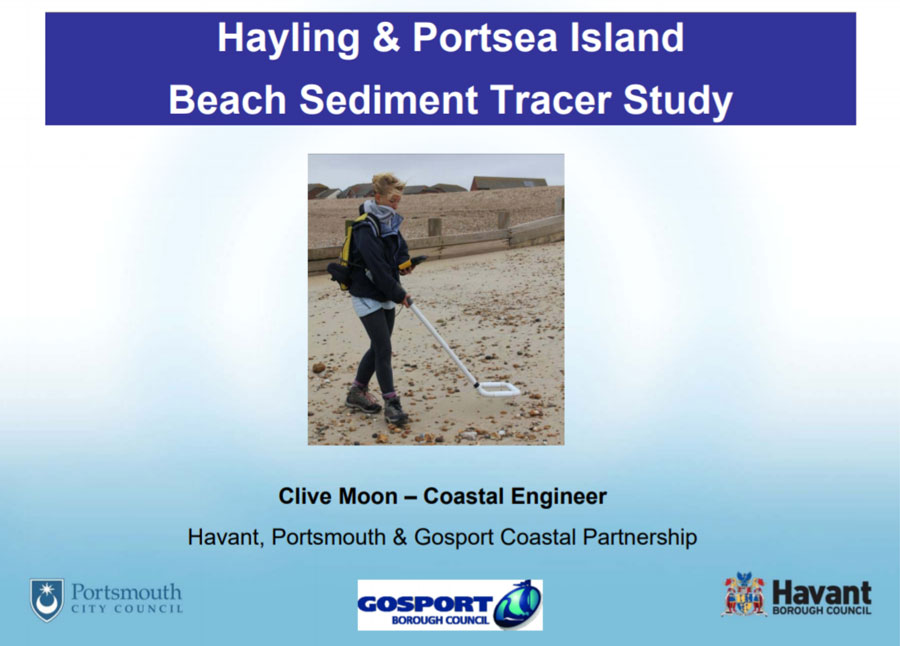 The study was carried out to supplement the South West Hayling Island Beach Management Study. £1,500 was provided by SCOPAC to assist with the preparation costs of the tracer pebbles.

“A total of 2,300 tracer pebbles have now been deployed around the Hayling and Portsea Island open coast as part of an ongoing study to confirm the long-term sediment pathways in the East Solent. The deployment locations include the nourished beach at Eastoke, either side of the Langstone Entrance Channel and the Southsea frontage (Figure 1).”

On Hayling Island, 10% of the original batch of 300 tracers deployed in September 2010 were detected in June 2011 after 9 months active in the beach. The tracers have moved west between 25 and 1900 metres and continue to move in a westerly direction towards the Langstone Harbour entrance channel.

Of the 1,000 tracers deployed immediately after the 2011 beach recycling operation at Eastoke, 24% were detected after nearly three months active in the beach. The tracers remain largely on the nourished frontage, and are following the anticipated pattern of sediment transport. The tracers deployed at the drift divide have dispersed in both directions along the nourished frontage but the centre of the mass of tracers remains near the deployment location, whereas the batches placed further away from the drift divide show a clearer pattern of movement downdrift in both directions. 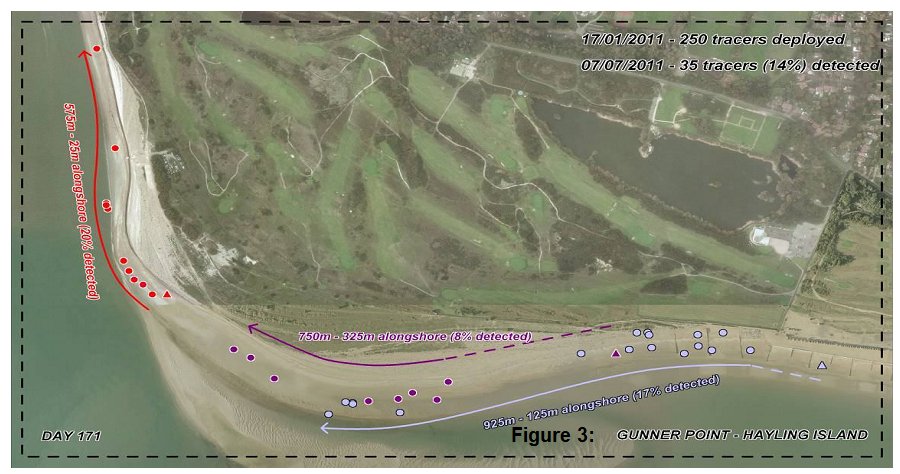 The deployment on the west side of the Langstone Harbour entrance is returning interesting results already, showing that sediment does bypass the Fort Cumberland outfall, initially thought to act as a permanent obstruction to sediment moving along the Eastney spit.

Tracer pebbles have been deployed at the Southsea Memorial (between Southsea Castle and Clarence Pier). These pebbles are currently moving in the anticipated east to west direction as outlined in the SCOPAC Sediment Transport Study.

Still, the tracer pebbles deployed between Southsea Castle and South Parade Pier are moving in a west to east direction which is not the assumed direction of drift outlined in the SCOPAC Sediment Transport Study. Longer term monitoring of the tracer pebbles will deduce if this is a seasonal variation or whether the drift is consistently west to east.

A towed RFID antenna array has been constructed to assist in detecting a larger number of tracer pebbles in one sweep. In addition, the handheld antenna has had additional batteries installed to increase the survey duration between recharges. The tracer pebbles can be detected up to a 1 metre depth. Those tracer pebbles not recovered will either be buried too deep in the beach or will be taken offshore. 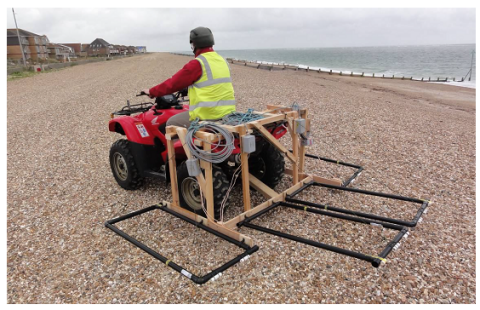