Assessing the performance of timber groynes

Evaluating the performance of different timber species will inform future groyne engineering decisions regarding choice of material for Risk Management Authorities across the SCOPAC region. Furthermore, any guidance developed on the re-use of timber will contribute to significant savings in capital expenditure on future schemes.

A 29 year field-test of 5 different species 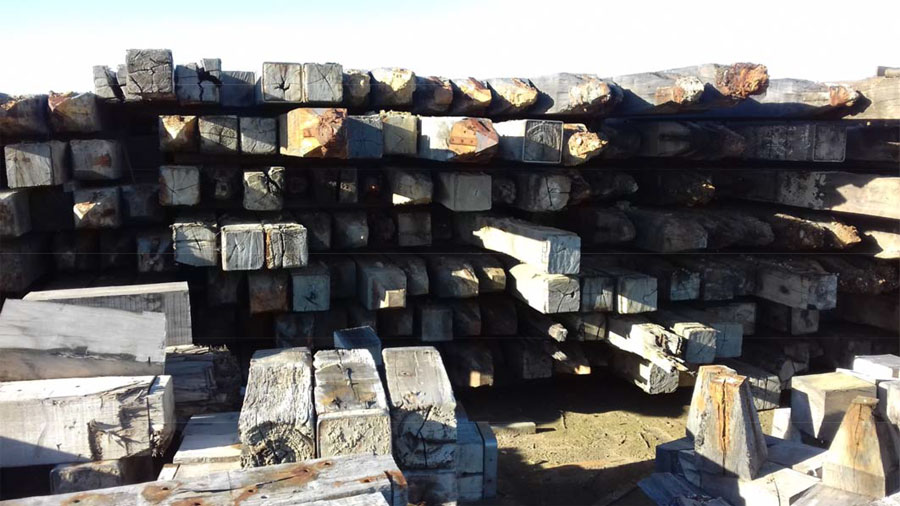 As part of the groyne renewal programme at Bournemouth beach that commenced in Spring 2015, five of the old groynes that were built as an experiment between 1985 to 1987 to assess the performance of different timber types in the field were deconstructed. These included groynes constructed of Greenheart, Ekki, Balau, Jarrah and Opepe, proving to be a golden opportunity to assess the relative merits of the 5 timber types after a 29-year field test.

Bournemouth Borough Council carefully dismantled each groyne, numbering each plank to record its original location, in terms of distance from seaward end and its level. Any planks that were “unworn” were set aside for re-use in new groynes and were not assessed further. Any “worn” planks were assessed to determine the extent of gribble infestation and the degree of abrasion.

The SCOPAC funds were used as a contribution towards the scientific analysis undertaken by Jon Williams of TRADA. In summary, the field data clearly show that the best performing species was Ekki (the most costly timber) followed by Greenheart, in terms of abrasion resistance and to a lesser extent gribble resistance. Although groyne planks comprising, Opepe, Jarrah and Balau did not fail prematurely en masse, they did not provide the same consistent length of service life as Greenheart or Ekki, or opportunity for re-use. Some of these field test results were in contrast to laboratory experiments.

For more information, the following reports are available: 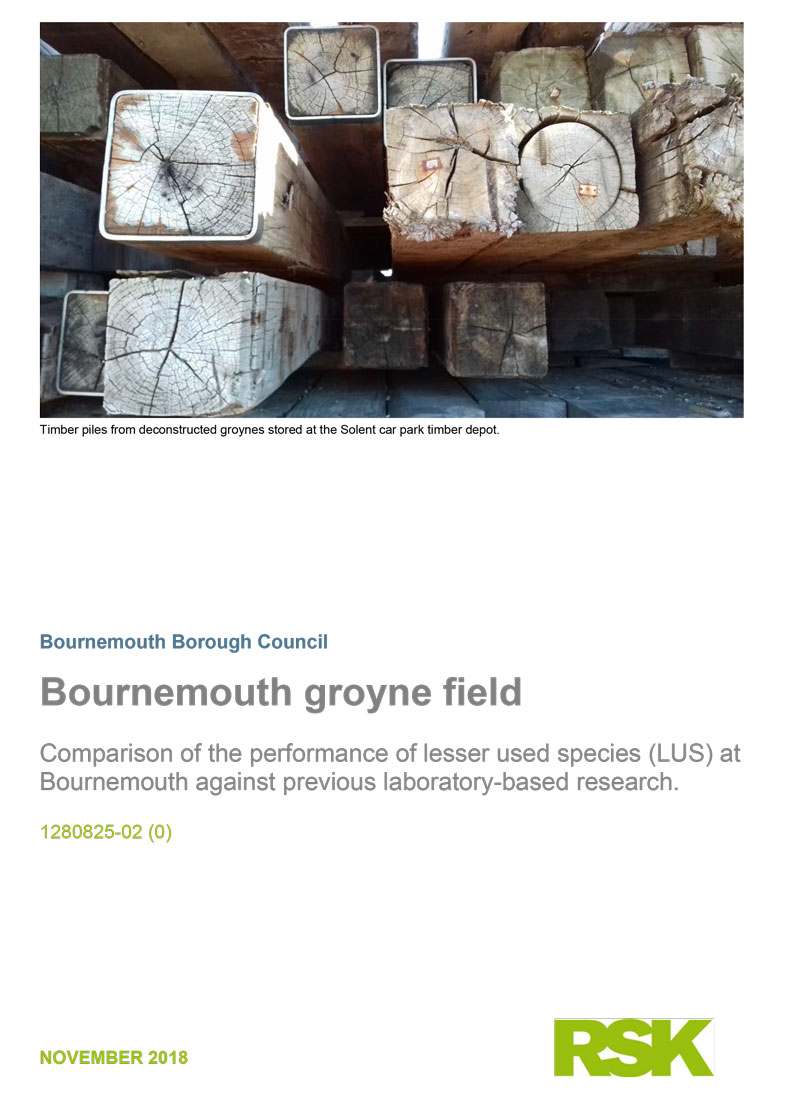 Inspection of planks from groyne No. 32

Preliminary evaluation of planks from deconstructed groyne No. 33 and piles from groyne Nos. 33 and 35 and assessment of the feasibility for their re-use in the Bournemouth/Boscombe groyne field

Preliminary evaluation of timbers from deconstructed groyne No. 35 and assessment of the feasibility for their re-use in the Bournemouth/Boscombe groyne field

Assessing the feasibility of resawing greenheart piles into groyne planks

Further assessment of Lesser Known Species (LKS) of tropical timber has taken place by Dr John Williams of RSK Environment Ltd, at Pevensey as part of an Environment Agency study.

Historically, the Environment Agency and Local Authorities have favoured a narrow range of “tried and tested” tropical hardwood timbers for groyne construction, with greenheart and ekki (Lophira alata) being the prominent timbers of choice.

In 2007, the Environment Agency embarked on a research project which had the objectives of identifying suitable lesser known species (LKS) of tropical hardwood for use in marine construction. This was achieved by screening candidate timber species in a series of fast track laboratory trials to evaluate marine borer resistance and resistance to abrasion. Promising LKS were then exposed in marine field trials. A limited number of species were further evaluated in order to determine their strength properties.

One outcome of this research was the selection, in 2008, of three LKS of tropical hardwood for use on experimental groyne GP10 located on the beach at Pevensey Bay. Planking comprising three LKS was used and their performance benchmarked against greenheart planking. The purpose of the investigation was to monitor the performance of the three LKS after 13 years of exposure; findings show that the three LKS used without formal Strength Class data are performing well. 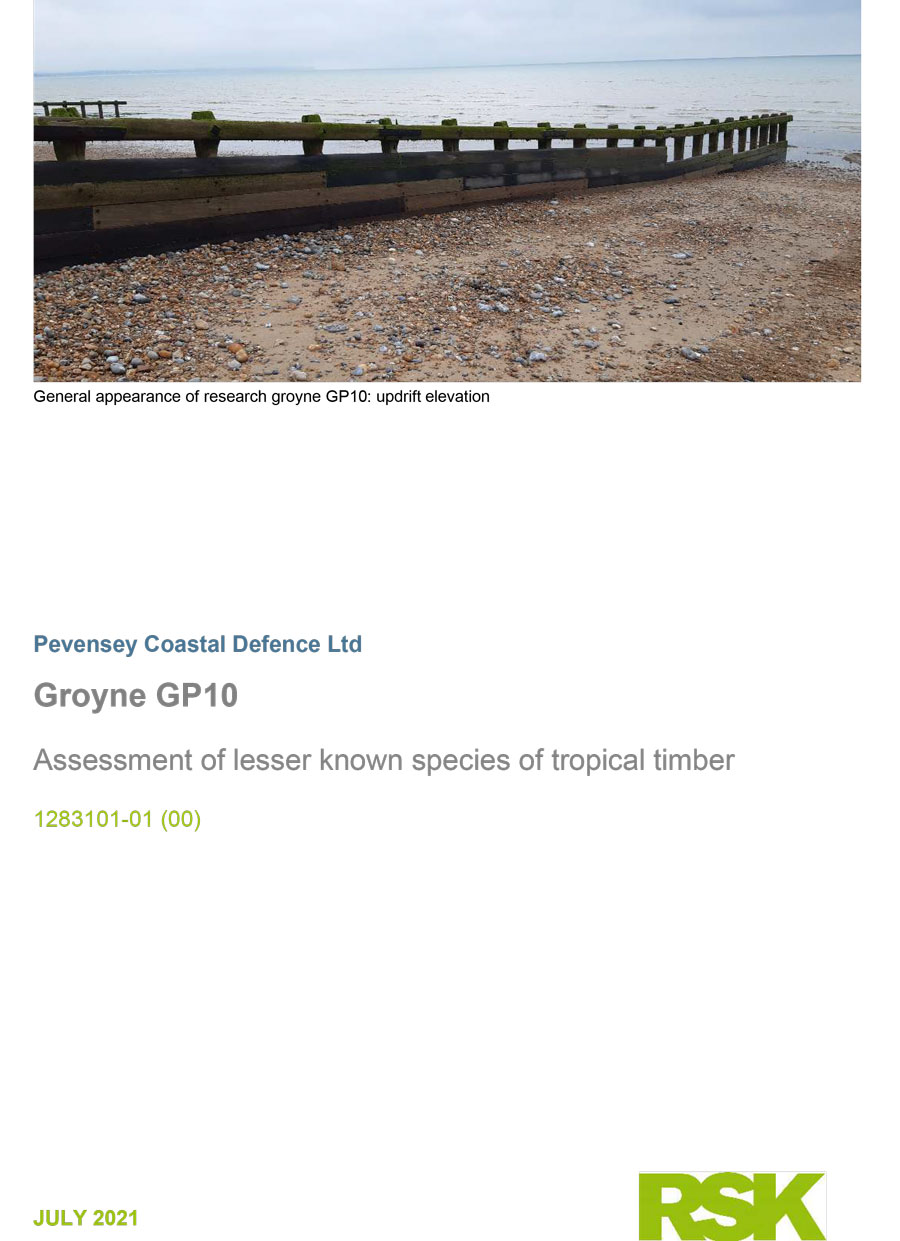